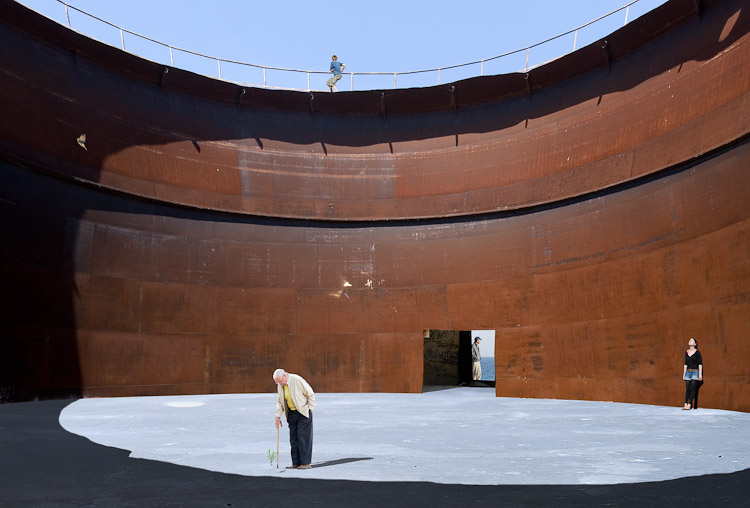 Reading the news exposes us to a flood of catastrophic messages: devastating droughts and wildfires, failing states, pandemics and financial crashes. You can look at all those incidents as unconnected singular phenomena, which is exactly what the common presentation of news suggests. From another angle, however, they appear as symptoms of a systemic crisis, with different branches that have common roots.

But in what way are we part of a larger system? Definitely, a Kenyan peasant and a Wall Street banker, a Secretary of State and an Iraqi policeman have totally different living environments – and yet they are connected by a global system that ensures that the Secretary of State can drink coffee from Kenia and that the banker’s penthouse is heated with oil that flows through pipelines guarded by the Iraqi police. This system accommodates the flow of goods and financial capital as well as the flow of information and ideas on how the world is and how it should be. This complex network has – like all social systems – a history. It has a beginning, an evolution and – eventually – also an end.

The global system that connects us is known under various names: some call it “the modern world-system”, others “global capitalism”. I use the metaphor of the megamachine, coined by the historian Lewis Mumford. The modern megamachine emerged in Europe around 500 years ago in long-lasting social struggles and has spread around the globe with explosive speed ever since. From the beginning, it provided a fabulous increase in wealth for a small minority. For the majority, by contrast, it has meant impoverishment, radical exploitation, war, genocide and the destruction of natural resources.

In the early modern era – starting in the 15th century – the foundations of a transnational trade and finance system and a global division of labor were developed. However, these economic structures were unable to function by themselves. They were and still are dependent on states that can enforce property rights, provide infrastructure, defend trade routes, cushion economic losses and reign in resistance against the system’s injustices. In the light of this, state and market are not opposite forces (as frequently claimed) but have historically emerged in a co-evolutionary manner as parts of a greater structure.

This system also encompasses an ideological framework legitimizing the forceful expansion and implementation of the system and portraying it as a salutary mission. A popular contemporary example for this is the invocation of our “Western values”. Formerly, terms such as “Christianity” (as opposed to the “pagans”), “occident” or “civilization” (as opposed to the “savages”) or “development” (as opposed to the “under-developed”) were used for this purpose. The dominant organizing principle of the megamachine is the endless accumulation of capital or, put more simply: to multiply money forever. This is something new in human history. Before, there were many systems in which people accumulated immense riches through the exploitation of others. There were also societies that have destroyed their own natural resources and livelihoods, and thereby themselves. None of them, however – from the Roman Empire to the Mayas – was based on never-ending accumulation; i.e. on the virtually automatic augmentation of goods and money that became an end in itself.

This bizarre logic that emerged in the early modern era is the central motor for the aggressive expansion and permanent growth that the system needs to exist. New markets and energy sources have to be made accessible by all means – including violence – and ever bigger landscapes are exploited for the economic system. According to this logic, any pause, any deceleration or moderation is equivalent to crisis and collapse. This is why – as we will see later – all hopes that “green technology” alone will save us from ecological collapse are deceptive.

In the wheelwork of never-ending accumulation

The logic of money-accumulation has its own dynamic reaching far beyond individual greed. One example for this is the legal form of joint stock corporations that developed around 400 years ago, constituting one of the main motors of accumulation ever since. In private, the chairman of the board of a large stock company might be greedy or modest, a greenie or a climate-denier; but regardless of his personal preferences, his function is simply to optimize the quarterly result of the company. If he does not fulfil this function or does so insufficiently, the system spits him out.

The most powerful organizations of the world are built according to this principle. The 500 largest companies in the world – most of them stock corporations – generate half of the global GDP. Their products – cars and medicine, soothers and machine-guns, animal fodder and electricity – are interchangeable means to their real end: the endless multiplication of money. Once the demand for certain products is satisfied, new demands need to be created. This is why it is indispensable to turn people into consumers whose contribution to social life is reduced to buying things, however meaningless, unnecessary or even damaging they may be. In this logic, there is no room for common decisions regarding the purpose and meaning of economic activities and for asking what people really need and how they want to live.

In the twenty-first century, however, the five-hundred year-long expansion of the megamachine is reaching insurmountable limits. On the one hand, the accumulation-machine is stuttering: the huge numbers of poor people across the globe and the crumbling middle classes do not have the money to keep buying a growing myriad of products at profitable prices. This is why the economy is shifting to finance speculations that erupt in ever deeper crashes, further destabilizing economies as well as states. The more effectively capital owners manage to dump wages and evade taxes, the more the crisis escalates. A massive taxation of wealth for financing redistribution and public economic stimulus programs might be the only way to reverse this trend and get the megamachine running again.

However, this is exactly what almost all predominant forces driven by short-termed self-interest strongly oppose. But even if it were successful, such a new growth program would make us feel the second limit all the faster: the destruction of our natural livelihoods. This limit does not concern the climate alone but also our soils, our fresh water reservoirs, biological diversity, the oceans and forests, all of which are exposed to an accelerating process of devastation. As you cannot eat money and there will be no economic growth on a dead planet, the limits of the biosphere are ultimately also the limits of the megamachine.

The illusion of “eco-social capitalism”

Time and again it is stated that we can modify this system in a way that decouples the production of prosperity from its devastating effects. The question is: Can there be such a thing as a green, social and peaceful megamachine? The proponents of concepts like “green growth”, “a green new deal” or “blue economy” answer this question with the affirmative. Their line of argument is: If we use fewer resources for each Euro of GDP, we can keep accumulating money while reducing our ecological footprint. In this way we could, it is argued, create an ethereal capitalism that is light on resources. Undoubtedly these concepts contain some meaningful proposals, for example, diverting investments towards renewable energies and resource-effective production. But the elephant in the room that has caused the misery in the first place – namely the logic of endless accumulation – is ignored.

In practice this leads to the illusion that we can keep the deep structures of our economy unchanged while creating the necessary change through a few technical innovations and ecological guidelines. The delusion of this way of thinking becomes obvious when we look for example at the boastful projection from the 1990s, which envisioned transformation towards a “dematerialized” economy based on the spread of computers and the internet: less use of paper and energy, less traffic – a disembodied green service-economy. What came out of it? During the last 15 years, for example, the commercial transport sector in Germany has increased by about a third. The Germans – in the meantime equipped with countless computers, tablets and smartphones – are still using, in addition to their gadgets, as much paper as 1,5 billion Africans and Latin Americans altogether. Only the economic recessions during the financial crisis in 2008 and the Covid-19 pandemic left dents in this curve, which is one of the many indications implying that true ecological relief is impossible without shrinking the economy. However, in the logic of never-ending accumulation this means crisis, mass unemployment, aggravated social conflicts and state bankruptcies.

Only change is realistic

In order to escape from this dilemma, we need to change the deep structures of our economy and drop out of the machinery of endless accumulation. We need economic models that serve the common good instead of profit. To achieve this, we have to change not only our mode of consumption but also our institutions, the way we produce and the logic of state action. We need a strategy for massively fostering common-good-oriented economic activities based on local and regional networks, while shrinking economic sectors that are bound to the principle of accumulation and predatory exploitation. Utopian? Possibly. But certainly not out of touch with reality. In the face of the global crises, the idea of keep going with a few cosmetic amendments is what seems unrealistic. In the light of the looming chaos, radical change is the only realistic option. This change will come, whether we like it or not. The only question is: what will this change look like? Who will shape it and push it in which direction?

Nothing points towards a soft transition. On the contrary, times are turning uncomfortable for more than one reason: Because we have held on to the illusion of green capitalism for too long, we now lack concepts for exiting the megamachine. In the meantime, the global elites fence themselves in high-security gated communities and seem determined to defend their privileges by any and all means. A fight for the full pockets of affluence seems to be on the horizon, and in many countries, authoritarian, fundamentalist and racist forces are ascending. Because a transitional plan is lacking, we have to anticipate ever more dramatic systemic breakdowns: financial crashes, ecological disasters, pandemics and social crises. So how can social and ecological movements prepare for this?

In such a situation the movements striving for a social-ecological transformation will have a chance only when they join forces, when they leave their traditional niches and together occupy political spaces becoming vacant along the decay of the old order. If ecovillages and the initiatives against evictions, striking health professionals and rebelling university teachers unite, they might gather enough energy to become systemic.

However, as soon as such movements leave their niches, adverse winds also increase. This is because the path towards a truly common-good-oriented economy that is viable for the future is no win-win game. To walk this path means to defy powerful interests and question ownership structures. Most people in cities, for example, are forced to participate in the accumulation as wageworkers in order to pay rent pocketed by a clique of real estate fat cats and funds in order to keep the wheels of the financial markets turning. A serious transformation is unthinkable without changing ownership structures. The same applies to the struggle for decentral energy structures, other forms of mobility, food sovereignty, patent-free products and our water and health supply.

We are moving towards a new era of revolutions. It is impossible to project the final results: whether it will be a world shaped even more by injustice than today, or a more peaceful world. Only one thing is for sure: in a chaotic system even a butterfly’s wing flap can cause a storm on the other side of the World. It is up to all of us.

The text is published on www.degrowth.de: Exit from the Megamachine