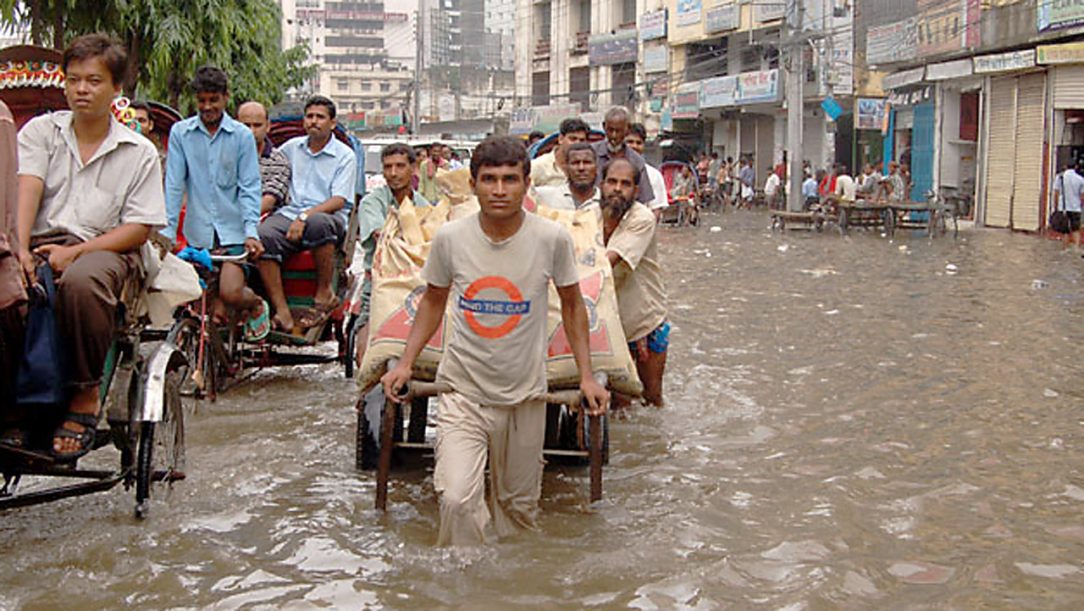 Industrialized countries are imposing a shock program on their citizens and their economies in order to fight the Corona pandemic. For this purpose, they resort to measures that are unprecedented in recent history: civil rights such as the freedom of assembly and the freedom of movement are suspended in many countries for an indefinite period, as is the right to political asylum. Large parts of the economy are put to a halt, including gastronomy, sports, tourism, the cultural sector and even – unthinkable until recently – the automotive and aviation industry.

If one compares these measures to the reaction to another, much more severe crisis, which is the threat to life on earth that is posed by climate chaos and mass species extinction, there is a striking contrast. While in the Corona crisis many governments are now acting swiftly and drastically on behalf of a higher goal – the health of their citizens – regardless of short-term economic interests, there has been hardly any real progress in the climate debate for the past 40 years. Neither are there binding reduction targets even remotely in line with the 2-degree goal, nor any serious plans for a rapid conversion of our infrastructures and our economy. Demands for effective climate protection measures are usually turned down by pointing to the sacrosanct freedom of businesses and consumer choices. Banning short-haul flights? Impossible! Blocking SUVs from cities? Unthinkable! A fast exit from fossil fuels? Too many jobs at risk! Restricting meat production? Eco dictatorship! Converting car factories to the production of public transport systems? Communism!

However, in face of the virus, almost everything is possible. Spain has nationalized without further ado private hospitals in order to secure a better care. The German finance minister is considering a temporary nationalization of corporations to save them from collapse. Rescue packages amounting to trillions of dollars are currently being negotiated to stabilize the economy – funds that we were told were never available for a social-ecological transformation. A sharp rise in state deficits that will necessarily result from these measures is not considered a problem anymore, while budget discipline and austerity were holy cows still a couple of weeks ago.

This contrast is all the more startling as the corona pandemic is, even by the most gloomy predictions, by many orders of magnitudes less deadly than an unchecked climate disaster. Sure: We must do all we can to protect populations in the pandemic, especially high-risk groups such as elderly and sick people. But why is not the same true for climate victims? If the precautionary principle applies to the Corona virus, it must apply to the climate as well. Furthermore, the scientific basis for estimating the actual dangerousness for Covid-19 is – as virologists and epidemiologists stress – still very weak. In the climate case, however, we have decades of intense research which unanimously concludes that a lack of action now puts hundreds of millions of people – if not more – at risk.

How can this contrast be explained? Why is Covid-19 declared an imminent danger that justifies to abandon long-held beliefs in “free markets” and even suspend civil rights, while serious climate protection is a no go for governments? Why are the lives of current and future climate victims so much less worth than people put at risk by the virus? Which ethical standards are applied to these decisions?

The first answer is rather obvious: climate disruptions are progressing much more slowly, at least in the beginning, they are a long-term issue, while our political and media systems work in the short run. When a third of Bangladesh will be flooded in a couple of decades, when large parts of the Middle East and Africa will have become uninhabitable because of overheating and Florida ravaged by hurricanes, then almost all of the politicians who are now setting the course will be out of office or dead. While in the Corona crisis, any politician who is questioning extreme measures of social distancing must now fear for his career, because he is considered irresponsible and a threat to the lives of people, there are hardly any consequences for those who sit out the climate crisis and do nothing. In the corporate media, climate ditherers are hardly ever denounced as a threat to public safety. Top politicians can endlessly talk with impunity about compromises that must be found between climate protection and economic interests – while in reality this logic of compromise is utterly pointless and irresponsible in face of the adamant physics of the atmosphere.

The second answer goes deeper. The victims of the climate crisis predominantly belong to the poorest people on earth, especially in the Global South. The wealthy, however, can afford to buy the best and safest pieces land and protect themselves against climate havoc for a long time. Covid-19, on the contrary, does not stop at borders and class divisions. Rich white men are equally endangered, especially when they are old. The contrast between the responses to the Corona and the climate crisis reveals a structural racism within the system, which continues colonial history. In order to maintain the way of life of the rich and predominantly white classes, the poor and predominantly non-white are being sacrificed. While thousands of cameras are transmitting pictures from Corona intensive care units 24/7 and evoking in us a sense of doomsday – and while in view of these pictures citizens are accepting almost any restriction of their rights and the erosion of their economic livelihoods –, the plight of millions in the Mekong Delta, where the rising salt water is already destroying harvests, goes largely unnoticed. Thus, the real apocalypse remains invisible.

The stark contrast between the handling of the climate crisis and the Corona pandemic entails some important lessons and even political opportunities. The state has proven to be much more capable of acting than previously claimed; even powerful business sectors have to bow to necessity, when policy makers, media and citizens alike are supporting drastic measures to protect populations from harm. Climate science shows clearly that industrialized nations have to reduce their greenhouse gas emissions by 80 per cent until 2030 if we are to have a chance to stay below 2 degrees Celsius of global warming and avoid the triggering of further fatal tipping points of the earth system. To this end, a rapid and profound conversion of our entire economy and our infrastructures is needed. This is not about simply replacing today´s cars with electric cars, introducing a carbon tax and keeping everything else as it is. Instead, we need completely different transport systems, based on public instead of private transport, different settlement structures, a massive restriction of air traffic, decentralized renewable energies and at the same time a significant reduction of energy demand in all sectors. We now know that states are capable of taking drastic measures if they want to – and that they can even intervene in the property rights of big corporations (as they did in the financial crisis of 2008 as well).

A decisive question for the future of the planet will be how the bail-out programs on the scale of trillions of dollars that are currently designed will look like. Will the dirtiest industries that are responsible for the climate crisis, especially the fossil fuel, the automotive and the aviation industry, be bailed-out and given a free ride to continue their deadly business-as-usual with tax-payer money? Or will the money be used to set the economy on a completely different path? Why not, for example, create hundreds of thousands of jobs for airline employees in public transport, especially in the ailing railway system, instead of bailing out the aviation industry? Why not force car makers begging for public money to switch their production swiftly to one-liter-cars, super-light electric vehicles and above all to streetcars and trains? Why not invest heavily in public health to get prepared both for future pandemics and heat waves? And why not, as Alexandria Ocasio-Cortez has proposed, raise income and property taxes for the most well-off to 70 per cent and more so they can contribute their fair share to the reconstruction of society, as it was the case under the New Deal?

The response to the current pandemic proves that such a bold plan is not necessarily utopian. But it can only become reality if people wake up from the current state of shock and get involved in order to intervene in the momentous decisions that are going to be taken in the coming weeks. We must not allow for a shutdown of democracy. On the contrary: now is the time to act.