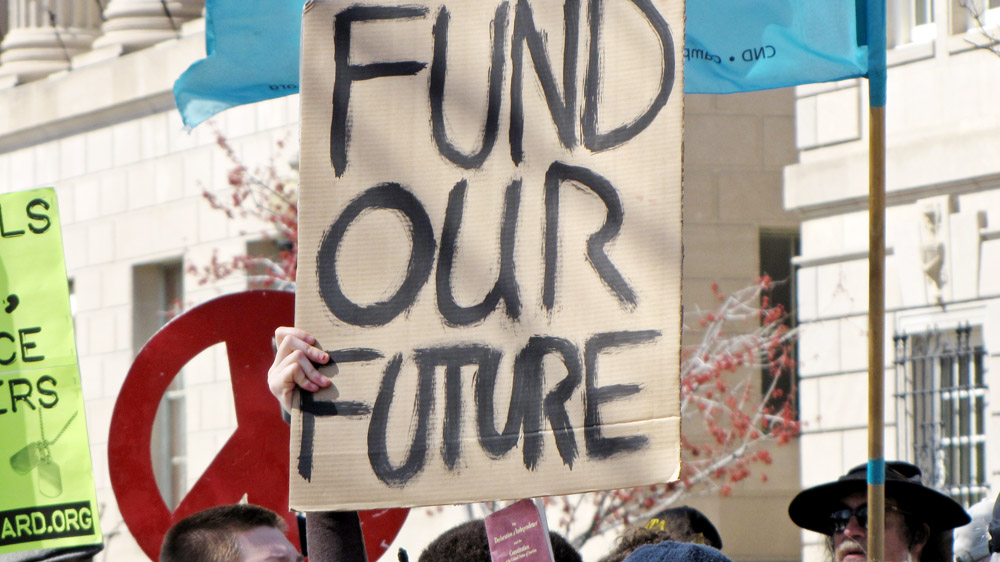 A few days after the Russian attack on Ukraine, a new report by the UN’s Intergovernmental Panel on Climate Change (IPCC) was released, making it unmistakably clear that the Earth is on the verge of tipping over into uncontrollable climate chaos unless countermeasures are taken very quickly. Half of the world’s population, according to the report, is already at risk from the effects of climate change. UN Secretary-General Guterres chose strong words: “The report is a damning indictment of failed climate leadership. . . . This abdication of leadership is criminal. The world’s biggest polluters are guilty of arson of our only home.” The window of opportunity in which we can still prevent the worst consequences is closing fast. But this message went largely unheard in the din of war. Yet it has far-reaching consequences—including for how our governments should respond to the war in Ukraine.

The double danger of climate collapse and nuclear war is reflected in the so-called Doomsday Clock published by the Bulletin of the Atomic Scientists. The hands were already at 100 seconds to midnight before the Russian invasion. A rational world domestic policy must therefore do everything possible to turn back the hands bit by bit and maneuver us out of the danger zone. And that means: reducing the danger of an expanding war, which could turn into a nuclear world war, and at the same time rapidly putting the brakes on climate change and ecological devastation. The responses to the Ukraine war must therefore be put to this double test.

In late spring, the German government approved an additional 100 billion euros for the Bundeswehr, as well as an increase in annual military spending to two percent of GDP. This amounts to the biggest militarization push in the history of the Federal Republic. While this seems understandable at first glance in light of the Russian aggression, a second look raises some serious questions. First, the most obvious one: will this money for armaments help the people in Ukraine? The answer is a clear no, even if one thinks that the West should support Ukraine militarily. While the money is going directly into the pockets of Rheinmetall, Lockheed Martin, and the like, the weapons purchased will be delivered only in a few years and are destined for Germany, not for Ukraine. Will it make Europe and the world safer in the medium and long term? This is highly questionable, to say the least. History teaches that arms races tend to increase the probability of major wars. Take World War I, for example: Before 1914, Britain, Germany, and France engaged in an unprecedented competition to outdo each other in military destructive power. In the end, the regional crisis over Serbia was enough to plunge Europe’s “sleepwalkers” into the greatest catastrophe in its history up to that point. The alliance constellations dragged one nation after another into the abyss. All the weapons had not made Europe any safer.

The presence of nuclear weapons adds a whole new dimension to this. A nuclear war would not only render the regions of the northern hemisphere hit by the bombs uninhabitable, but the ensuing nuclear winter would also destroy agriculture globally, thereby all but wiping out humanity.

One must also add the question of why today’s NATO military budget of a whopping $1.2 trillion per year—that is 60 percent of global military spending—should not be enough to deter Russia, which itself has a budget of only $62 billion, from attacking NATO members. Will $1.5 trillion make us any safer? Has NATO’s 25 percent increase in spending from 2014 to 2021 (Germany increased by even 40 percent) made us safer and prevent the war in Ukraine? And what good are all those nuclear weapons if even their proponents don’t believe that deterrence really works?

The third principal question is what effect the additional triple-digit billions for the military will have on addressing the second major threat to our survival, namely climate havoc. Where will this money come from and who will end up missing it? Economist Robert Pollin has put forward the most comprehensive proposal yet for a Green New Deal that could still avert the approaching climate chaos. It includes $4.5 trillion per year in investment in ecological transformation, to be provided by the major contributors to the climate crisis. This is equivalent to about 2.5 percent of global economic output. The current surge in militarization is severely hampering the ability to make these investments and is therefore pushing us further toward midnight. While huge sums for armaments are approved without much debate, demands to set up a climate emergency fund have been ignored. Instead of investing in a general ecological transformation, for which we have only a decade left, money is being poured into the most climate-damaging of all economic sectors. The U.S. military is already one of the largest emitters of greenhouse gases in the world.

We simply cannot afford to channel our resources into further militarization for a highly questionable gain in security. Instead of blind rearmament, other, more intelligent paths must be taken in response to the existential double crisis. As Bill McKibben, founder of 350.org, aptly noted, in response to Putin’s war we need a major offensive of renewable energy and ecological transformation to move away from the very oil and gas that feed authoritarian governments around the globe and fuel wars. Decentralized renewables also make us far less economically vulnerable than our current dependence on gas and oil.

As far as the situation in Ukraine is concerned, initiatives to broker a ceasefire are desperately needed, because this is the only thing that can actually help the Ukrainian people. As neither Russia nor Ukraine are able to win this war in the near future, negotiations—including the question of neutrality—are the only way to reduce the devastation and the risk of a nuclear Armageddon. One opportunity has already been missed. As the US-magazines Foreign Policy and Responsible Statecraft have recently reported, Ukraine and Russia were about to strike a peace deal in April, which included the complete withdrawal of Russian troops to the lines of February 23 and a neutral status of Ukraine. But the plans were buried due to an intervention of the then British prime minister Boris Johnson in Kyiv on April 9.

In the medium and long term, there is no way around developing a fundamentally new security architecture for Europe, with all parties involved, as difficult as that may have become since the Russian war of aggression. The foreign policy legacy of Willy Brandt and Helmut Kohl (“creating peace with ever fewer weapons”) can still serve as a guideline even in dark times like the present. Brandt’s thinking at the time was simple: the question is not what we think of the government in the Kremlin, whether we approve or condemn its actions. It is about ensuring our survival in the face of the threat of nuclear war—and climate havoc—while at the same time bringing concrete relief to the people. This is about more than being right. It is about a realism of survival.